Find the best deals on 6,261 hotels in Barcelona, Spain

Find the perfect Barcelona hotel for business or leisure

Things to do in Barcelona

Are there hotels available near La Rambla?

Hotels near La Rambla are typically 7% less expensive than the average hotel in Barcelona, which is 152 C$.

Are there hotels available near Placa de Catalunya?

Are there hotels available near Passeig de Gracia?

Search for hotels in these Barcelona neighbourhoods

When to book a hotel in Barcelona

Let us help you with the best tips about Barcelona

In the summer months from June – August, hordes of tourists visit the city to enjoy the warm, balmy weather and beautiful beaches. Most beachside hotels are fully booked at this time, so if you’re looking for specific accommodation, try to secure your booking in advance. To avoid the large tourist crowds, visit in late May – early June or in September. Average temperature hovers around 25 degrees Celsius during this time. You will experience pleasant weather in October as well, but you may not be able to enjoy a dip in the sea as the occasional rainfall starts cooling down the water. If you don’t mind skipping the beach activities, and enjoy slightly cooler temperatures of 12 – 15 degrees Celsius, visit Barcelona between November – March and get some worthy bargains on accommodation and travel.

The rich architecture and local attractions in the old city area of Barcelona are best experienced on foot. For getting around to other parts of the city, you can rely on the fast and efficient metro services. A single fare ticket cost €2.15 EUR, and is valid on the metro as well as the bus. An integrated ticket called T-10, allows multi-person travel for up to 10 journeys on the bus and/or metro. This costs €9.95 EUR for travel within Zone 1. To go around the popular attractions, you can also book a tour with the open-top double-decker buses run by Barcelona BusTuristic. A 1-day adult tickets cost €29.00 EUR, and 2-day tickets cost €39.00 EUR. Metered black-and-yellow taxis are easily available on the streets. Barcelona has narrow streets and experiences frequent traffic jams. So try to avoid driving in the city and rely on public transport instead.

How much does a hotel in Barcelona cost per night?

Hostels and cheap hotels in Barcelona

Get the best value hotel in Barcelona

Where to stay in Barcelona

Best places to stay in Barcelona

Barcelona’s biggest attractions are its scenic beaches and stunning architectural diversity. From the Medieval centre of Barrio Gótico to the Modernism of Antonio Gaudí, the influence on art and architecture is abundantly visible in the city’s world class museums, as well as through the art installations on every street corner. The culturally-rich music festivals, traditional tapas bars and ongoing culinary renaissance make this vibrant Catalan city even more special. Barcelona is divided into different ‘barrios’ (neighbourhoods), each of which has a unique personality.

El Born is a charming and festive neighbourhood, just a 10-minute walk from the beach. The Passeig de Born street has the city’s hottest nightlife with scores of bars lining both sides of the pretty avenue. This barrio is also home to the Museu Picasso and a bunch of boutique shops, cafés and restaurants. Amid the shops and cafés on a pedestrian street in the heart of El Born, you have Pensió 2000, a modest hotel with bright and comfortable rooms. You can also check out the 18th-century, family-run Hotel Banys Orientals that has boutique-style accommodation with elegant rooms at an excellent location in the fashionable El Born neighbourhood.

One of the most authentic and vibrant Barcelona neighborhoods, El Raval boasts an emerging arts scene and is the home-ground of many young local artists. The streets are lined with plenty of ethnic restaurants, tempting bars and cafés, a host of art galleries and studios, and trendy boutiques and shops. In the heart of El Raval, you have the individually decorated rooms and suites of Casa Camper Barcelona, a designer hotel set in a restored 19th-century Gothic-style tenement. The hotel boasts several complimentary services, including a full buffet breakfast and a wide choice of snacks all day in the hotel’s lobby. Enjoy the sophisticated and luxurious rooms of Hotel España whose unparalleled interiors are considered a jewel of Catalan Modernism. The hotel features an open-air rooftop swimming pool, a spacious solarium with panoramic views of the Ciutat Vella, and a celebrity-chef led restaurant.

A relatively newer neighbourhood, Eixample, literally meaning ‘extension’ or ‘expansion’, is a true example of the Modernista movement. Most of the architectural marvels created by Catalan architect Antoni Gaudí are in this area. The Eixample is also a fashionable shopping hub and home to several high-end designer boutiques. On the main floor of a celebrated Modernist style building, you can enjoy a comfortable stay at the ornately-furnished Anakena House bed and breakfast. Just a 2-minute walk from Casa Batlló, enjoy a luxurious stay at the Mandarin Oriental, Barcelona that features spacious rooms and suites with private balconies overlooking the prestigious Passeig de Gràcia. Apart from an excellent location, the hotel has some terrific dining options, a verdant first-floor terrace, and a relaxing open-air rooftop pool.

Barceloneta and the beach communities

The 6-kilometres of Barcelona beaches begin at the Barceloneta and run all the way down to the Fòrum area. Most of the lively beach shacks, upmarket seafood restaurants and beachside entertainment is along this area. As you go further along this strip, the beaches become cleaner and less crowded. Stay in cozy, contemporary rooms of the Hotel Pullman Barcelona Skipper, set in a sleek angular building, just 200 metres from the Barceloneta Beach. On the Barceloneta boardwalk, you have the W Barcelona hotel, set in a tall, shimmering high-rise with designer interiors, and chic rooms offering spectacular water views.

If you want to stay in the ‘old city’ in the heart of Barcelona, consider the Barri Gòtic, (Gothic Quarter) neighbourhood. The area’s narrow winding streets lead to tiny plazas called ‘plaças’, where you can admire the classic architecture or simply relax and enjoy the multitude of shops, restaurants, cafés and bars surrounding the ‘plaças’. Check out Hotel DO: Plaça Reial, a unique gastronomic boutique hotel set in a historic 1856 building, offering exclusive luxury accommodation with views of the vibrant Plaça Reial. You can also stay in exquisitely decorated rooms in Hotel Neri Relais & Châteaux, a chic hotel set in a 12th-century building in the heart of the Gothic Quarter.

Given the large tourist crowds that the city attracts, particularly in peak season, it is not easy to find rooms at many of the budget hotels in Barcelona. Try to book in advance if you have a preferred hotel in mind. In The Eixample neighbourhood, you can look at the simple, spacious rooms of Guest House Barcelona Bruc. Check out Casa Bella Gracia, a cozy, modern lodge with beautifully designed rooms in the Vila de Gràcia neighbourhood. In El Born, consider the Yurbban Trafalgar, a charming hotel with modern rooms, a rooftop plunge pool, and mesmerizing views over the El Born area and beyond.

What to do in Barcelona

Barcelona is a hip, urban destination offering scenic sandy beaches, plenty of historic and architectural exploration, and an ever-present energetic vibe. Each time you visit the city, you’ll find something new to discover here. If you are visiting Barcelona for the first time, here are a few suggestions that you may want to include in your itinerary.

How long do people stay in Barcelona?

3 nights is the typical length of stay for people visiting Barcelona.

How much does a hotel cost in Barcelona?

The price of a hotel in Barcelona depends on several factors such as star rating, location and demand. Generally speaking, the average cost of a hotel is around 121 C$ per night.

When is the best time to book a hotel in Barcelona?

The cheapest month to book a hotel in Barcelona is December. The cost of your room could be as much as 25% cheaper than in peak months.

Which day is cheapest to stay in Barcelona?

Room prices for hotels in Barcelona will be at their lowest on Sunday and peak on Thursday.

How much does a hostel in Barcelona cost?

Barcelona Hostels typically cost in the region of 70 C$ a night for each person. This price is taken from hostels and hotels with a 2 star or below rating. Hostels are very economical and come out on average 50 C$ cheaper than the average price of a hotel in Barcelona.

Based on the weather in Barcelona, what attractions are popular during March?

With an average temperature of 11 °C and expected precipitation of 42 mm, March is a great month to explore the outdoors near Barcelona.

Learn more about these user-preferred hotels in Barcelona 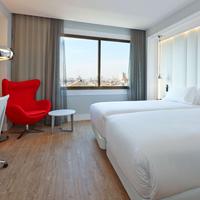 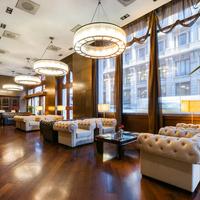 Check out hotel prices for these cities that are also in

Start planning your trip to Barcelona

Not set on Barcelona? Search the best deals on hotels in these destinations